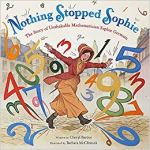 The Story of Unshakable Mathematician Sophie Germain. Sophie Germain was an 18th century math prodigy who simply refused to accept the assigned roles for a female. Her parents, the schools, the science establishment—nothing stopped her insatiable need to understand and use mathematics. She eventually found the formula that would predict patterns of vibration. We use it today to build bridges, skyscrapers, skytrains, earthquake scenarios…anything that has a structure and can vibrate. In 1816, she became the first woman to win a grand prize from the Royal Academy of Sciences.

Writing to a Pattern

One of the things that holds this story together is the repeated line, “But nothing stopped Sophie.” Ask students to write of something they wanted to do and worked hard to do—it can be as simple as mastering a computer program or a game, riding a bicycle, learning to type, playing an instrument, reading a map…it doesn’t have to be amazing, it just has to be a challenge.

Ask them to set up the scenario of failing at first, then having 3 tries before the final success. At each stage it would be “But nothing stopped (name of student)”.

The French Revolution and Sophie

A great way of remembering lists of things or connections of things is through mnemonics—memory devices. Most students easily remember, “In fourteen hundred and ninety-two, Christopher Columbus sailed the ocean blue,” because it rhymes. We can remember HOMES as the names of the Great Lakes—Huron, Ontario, Michigan, Erie, Superior—because we can think of them as being in your HOME country,

Well, to remember when the French Revolution was, we need to think of the song, The Marseilles, and then sing,

Why does this matter to this book? It doesn’t, except that Sophie lived in France, during the French Revolution, and it affected how she saw math—as something solid, unchanging, and true in a world that was chaotic.

The Art of Numbers

The artist, Barbara McClintock, has included fanciful numbers on several pages to show the passion Sophie has for math. There are several sites online that show how to turn a number into a picture which might be an interesting activity for students.

Students can be encouraged to create one of their own drawings for any number from 1-9. You can follow the directions for this activity in the video above. The drawings are cute, but there are commercials between each of them. I recommend turning off the sound and blacking out the screen during the commercials.

Here’s the conversion of the number 1 into a liner.

When students have completed their drawings, they can ask other students to guess what the original number was. 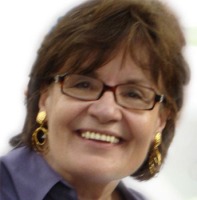