In this picture book, based on a Leo Tolstoy short story, our hero Nikolai seeks the answer to his three questions from a series of animals, ending with the wise turtle of the mountain. It is his response to a stranger’s cry for help that leads him to the answer. It’s a simple book based on three questions: What is the right time? Who is the most important one? What is the most important thing to do?

A fable has specific characteristics:

By this definition, which of the qualities of a fable does this story have or not have?

Internet Version of the Book

I looked at several YouTube versions of this book, and think this is the best. If you want to read it yourself, simply turn off the sound, and read aloud as the story proceeds.

The Teaching Children Philosophy website has a collection of some interesting activities for students based around picture books (click book modules). Some discussions that might be useful are:

(This can be applied to images as well.)

Based on the original poem of the story of the fly who is flattered into stepping into the spider’s web, this picture book is beautifully illustrated in black and white. The spooky Victorian house is the perfect setting for the tale.

This is a fable not written by Aesop. What are the characteristics of a fable that demonstrate that this is one:

The Moral of the Story

Fables always have a moral. The rhyming moral of this story is:

“And now, dear little children, who may this story read, To idle, silly, flattering words I pray you ne’er give heed; Unto an evil counselor, close heart and ear and eye, And take a lesson from this tale, of the Spider and the Fly.”

Be sure students know what that means. Do they agree that it is the moral of the story? What modern “schemer’s webs” might there be to tangle you up? 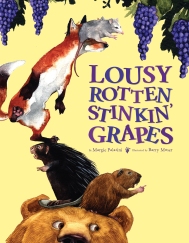 In this twist on Aesop, the fox progressively involves a series of animals in an elaborate plan to help him get the grapes. He refuses to listen to their advice, and when his plan fails, he leaves saying the grapes are probably not ripe. After he leaves, the other animals get the grapes.

The Power of Repetition

This book presents an opportunity for students to understand the power of a repeated line; in this case, “After all, I’m the fox. Sly. Clever. Smart.” Also repeated are: “Voila! Grapes!” and “If you say so.”

As a listening skill, ask each 1/3 of the class to listen for their particular phrase and note the total number of times it occurs, as well as when each of them happens.

Ask them to write a story, or re-write an existing one, to add humorous repeated phrases.

Our fox makes somewhat of a “Rube Goldberg” plan, each part of which is more elaborate than next, and requiring ever more complicated diagrams. The original model of a plan that is too elaborate is named after Rube Goldberg. The illustration is of a machine to brush your teeth. Ask students to create a “Rube Goldberg” plan to do something simple like wash a car, or sharpen a pencil.

Rube Goldberg was a cartoonist who was most famous for creating cartoons to solve simple problems in an elaborate way. The board game, Mouse Trap, is based on a Rube Goldberg machine. Today, there are Rube Goldberg contests for inventors to create overly elaborate solutions to problems. You can view some of these machines on YouTube, my particular favourite is OK Go’s music video for “This Too Shall Pass” because there is music cleverly included.

A classic Chinese folktale, of a man who owned a horse and at each turn of fate believed that things were neither as good, nor as bad, as they might seem.

Oral Language: The Unfortunately Game
Ask students to stand in a large circle. Start with a line such as “James went to the library.” Continue from there with the next student saying, “Fortunately…”. Students alternate a fortunate, unfortunate circumstance as they go around the circle. This requires students to be a little inventive, and warms them up to the idea of writing their own book. Once students understand the system, playing in smaller groups creates more participation for each individual.

Create a scenario and then write a story in which a character repeats your catch phrase—each time saying “It might not be so great” or “It might not be so bad”.  This can involve something simple like forgetting your homework, lunch, library book, etc.  It could even be set somewhere such as the middle east, with the issue involving a camel.

The Lost Horse is written in only 207 words in total, and 17 sentences, so it is not a huge challenge.

Create Your Own Wisdom

What do you think the “moral” of the story is?  Discuss with the students.

Talk about using the idea of “what I learned from this was…” when they write their own personal writing anecdotes.  We take away a lesson from a lot of the things we do in life…that’s how we avoid making the same mistakes  over and over again.

The Hare family is having dinner when Goldilocks, fleeing from the three bears, falls down the hole. Having hurt her foot, she remains as a guest, but is a terrible one. How can the Hare family get rid of her?

Goldilocks is a living example of absolutely terrible houseguest manners. They are so bad, that students should be able to construct a “good house guest manners list” that consists of mainly doing the opposite of what she does. Challenge them in small groups to come up with a list of 10 Great House Guest rules. (They shouldn’t forget bringing a gift for the host/hostess and sending a thank you note.)

The trailer for this book is really a trailer, that is, it summarizes her departure from the three bears and then proceeds to describe how she is the “houseguest who won’t leave.” It’s clever and fun.

A wonderful retelling of the Aesop fable where the fox makes frequent attempts to get at the grapes until he finally says that they are probably sour anyway. Hence the expression “sour grapes”.

In this version Fox attempts to reach the grapes but because he is “sly. Clever. Smart. After all, I am a fox.” He makes a plan and “voila!…Grapes!” Except it doesn’t turn out quite that way.

First of all he harnesses the energy of the bear. Then the beaver, the porcupine, the possum, each time making the plan more and more elaborate. Each time as well, the fox ignores the suggestions of his “assistants.”

When they point out their simpler plan at the end, the fox storms off in a huff. “Well, do as you wish. I, for one, wouldn’t think of eating those lousy, rotten, stinkin’ grapes now, even if I could…They’re probably sour anyway.” (While in the foreground his assistants are joyfully eating the grapes.)

Create Your Own Take on Aesop

Students will enjoy using this as a model to create their own version of an Aesop fable. They can add more characters, dialogue, a twist, additional descriptions, and a setting. This story is about 1,000 words, but students can write a terrific Aesop fable in about 500 words if you wish.

The Moral of the Story

Every fable has a moral. The original moral of this story is something like, “People who can’t do something, make up reasons why they didn’t want it in the first lace.” The expression “sour grapes” is used for someone behaving this way. This fable has that moral, but has several other morals worth discussing as well: