Dorothea Lange had a difficult childhood with divorced parents, and childhood polio. This may have made her sensitive to the suffering of others, because instead of taking photos of the rich and famous, she took photos of people in distress. Her most famous photo captures the entire Depression in a single photo and inspired help for the suffering.

Some of the most famous photographers in the world have been women. Students could take a sample picture from one of these women and “analyze” the picture. Here is one example from one of Lange’s pictures: 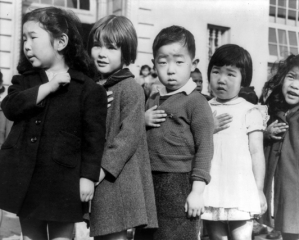 Give students the words to The Pledge of Allegiance and see if they can recognize the irony of what is about to happen to these little children after war is declared on Japan following the bombing of Pearl Harbor. It’s a good time also to talk about why the Internment of the Japanese in Canada happened.

Other Picture Books About Photography

Kamishibai Man, It’s a Snap, and Snowflake Bentley are also books about people who were involved in the history of photography.

Kamishibai Man is set in modern Japan where an old man decides to take his kamishibai show in to the big city to create street entertainment as he used to do it before TV. We have a feeling he is in for huge disappointment but he finds that parents who experienced it as a child are enchanted to see it again, and their children love it as well. He ends by deciding to go again the next day.

Before TV was invented, all silent movies had famous “actors” who did the voices of the screen. They were so famous that their names came before the title. When talking movies and TV eliminated the need for them, many became Kamishibai men, telling their stories with cards in “stages” posted on street corners.

Snowflake Bentley by Jacqueline Briggs Martin is about a farmer who was fascinated with trying to take pictures of snowflakes while they still had their original shape—and he did hundreds upon hundreds of them, showing that the architecture of each them was unique. He died from pneumonia caught during a snowstorm when he was out taking more photos after his book of photos was finally published but before he because really famous.

It’s a Snap: George Eastman’s First Photographs is about the creator of Kodak who brought photography to the masses.

Dorothea Lange had polio as a child and thereafter suffered from a severe limp. Many childhood diseases that could kill or disable children have been eliminated due to vaccinations created since the 1950’s.

Students should know how “dangerous” the world was before the creation of vaccines and how frightened parents were when their children got sick. Explain what a vaccine is to the students using background notes that can be found here. Assign groups to investigate the common childhood diseases (and smallpox itself), and report their results to the class.